Posted by Jeff Clarke on Wednesday, 23 December 2015 in My Blog 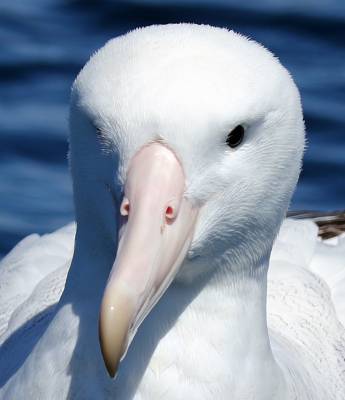 Some places draw you back time and again. Such a place is Kaikoura in New Zealand. The town itself is great and has a laid back, environmentally conscious, vibe. The setting is special too but what draws me back is the wealth of ocean-going wildlife. You can engage with it in a whole variety of ways but my personal favourite is via Encounter Kaikoura. They get me, and thousands like me, intimately acquainted with albatrosses and numerous other species of tubenose as well as giving me the opportunity to get in the water with the local Dusky Dolphins. For a seabird and cetacean nut like me what could be sweeter? 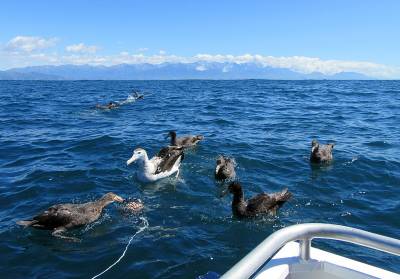 My last visit was in December 2012 so I was itching to get back on the water. We joined a 4 hour excursion that went out to some interesting underwater features and meant we encountered some additional offshore species. On the way out we homed in on a local fishing vessel. It had gathered an interesting assemblage of birds. Northern Giant Petrels were doing great imitations of their dinosaur ancestors while Cape Petrels fussed around the edges of the gathering like nervous subjects at the court of tyrannical superiors. 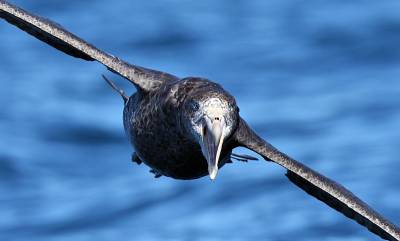 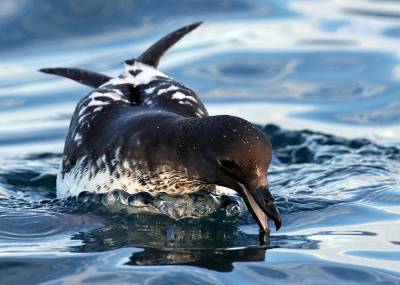 A Cape Petrel searching for scraps

Gibson’s Wandering Albatrosses tend to dominate the action like belligerent Barons, throwing their weight about putting the Northern Nelly’s in their place. Powerful as they are, these wanderers soon defer to the stately approach of a Southern Royal Albatross. The entourage parts without dissent as this leviathan of an albatross takes his leisure at the feast. 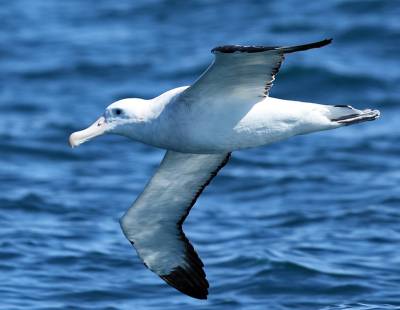 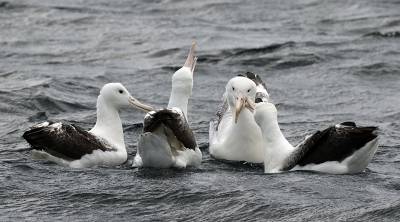 Northern Royals are here too but they can be strangely reticent and often loiter watchfully some distance away from the centre of the action, like a pretender to the throne awaiting their chance to seize the spoils. 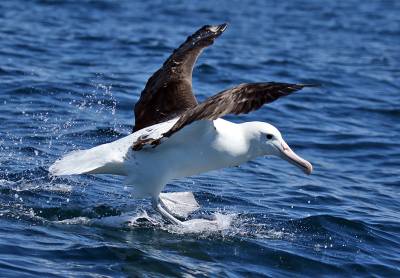 Touchdown for a Northern Royal Albatross

This court also has more layers of complexity. The Lesser Albatrosses, commonly known as Mollymawks are in attendance. Sometimes individual birds push their way into the throng claiming their share whilst others of their kind prefer to take what scraps they can from the periphery and avoid the real cut and thrust of the mêlée. 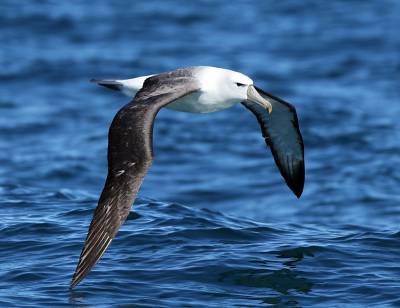 Two species of lesser albatross dominate at Kaikoura, both members of the ‘Shy’ complex. White Capped Albatross is slightly the larger of the two and tends to overpower its smaller cousin, the elegant looking Salvin’s Albatross. In 2012 the ratio of White-capped to Salvin’s on show at Kaikoura was probably 5 to 1. In 2015, almost to the day three years later, the ratio was reversed in favour of the Salvin’s. Gary, our skipper on the Albatross Encounter boat,  mentioned that these swings in species abundance were a regular feature at Kaikoura but that, as yet, they did not know the factors triggering the changes . 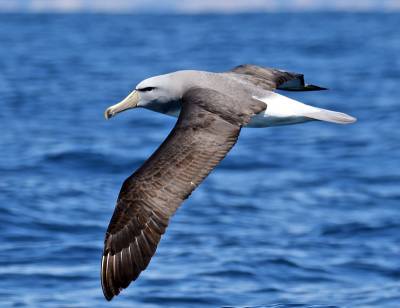 The further out we travelled the more shearwaters and petrels became a feature. ‘Muttonbirds’ is a phrase you encounter frequently in New Zealand and it usually refers to either Short-tailed Shearwater or Sooty Shearwater, both of these near identical species were around the boat as we chummed at different locations but, without seeing the underwing well, it was often impossible to be 100% certain which species you were seeing. Thankfully, the elegantly marked Buller’s Shearwater presented no such confusion. 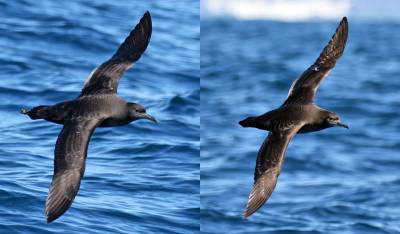 Two other look-alikes were also a feature of the day, Westland and White-chinned Petrels. The key is to get a good view of the bill but, even at a distance. identification was often straightforward as nearly all of the winter breeding Westland Petrels were in wing-moult and the summer breeding White-chins had a full set of wing feathers. 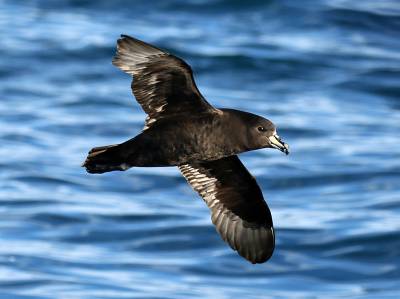 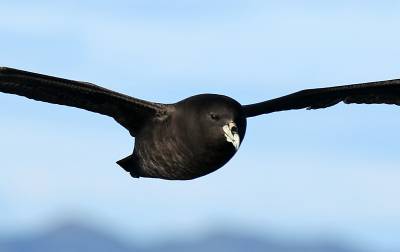 Can you the see white chin on the White-chinned Petrel?

Towards the end of our pelagic we headed inshore and here we ran into several significant rafts of the rare endemic Hutton’s Shearwater. For some reason I find these birds exceptionally difficult to photograph as they always seem to be angling away from the camera. They are also rather skittish. If you want to see this bird then Kaikoura is a must visit place. Its only breeding site is in the nearby Seaward Kaikoura mountains and after breeding they disperse offshore and are exceptionally difficult to find. 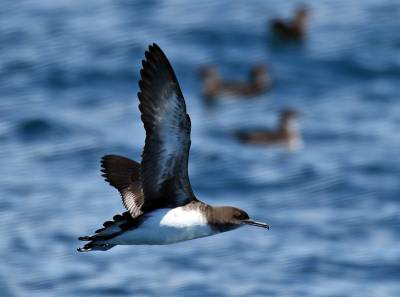 As an added bonus on this trip we got lucky with a cetacean hat-trick, offshore we passed two male Sperm Whales. In the shallower waters further inshore we had joyfully close views of a small pod of Hector’s Dolphins. This much declined endemic dolphin loves shallow coastal waters but this makes it vulnerable to static fishing nets and some populations are facing local extinction. 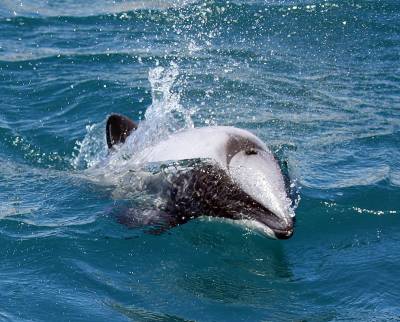 For a final flourish a small group of Dusky Dolphins decided to indulge in a courtship ritual very close to our boat. The leaping animals were so close I couldn’t get them in the frame. We could even watch the dolphins mating underwater. However, if you really want to see these dolphins at their absolute best, I recommend going on one of Dolphin Encounters’ dedicated dolphin swim tours, just as I did the following day. As with Albatross Encounter, it’s an experience you will not forget. 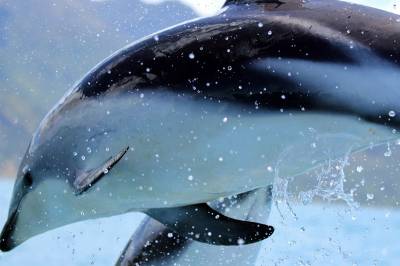 Leaping Dusky Dolphins at touching distance from the photographer.

One thing is for sure, this will not be my last visit to Kaikoura; an absolute must for any nature lover visiting New Zealand.