Posted by Jeff Clarke on Wednesday, 01 March 2017 in My Blog

Cruising the Andes to the Atacama Pt.1 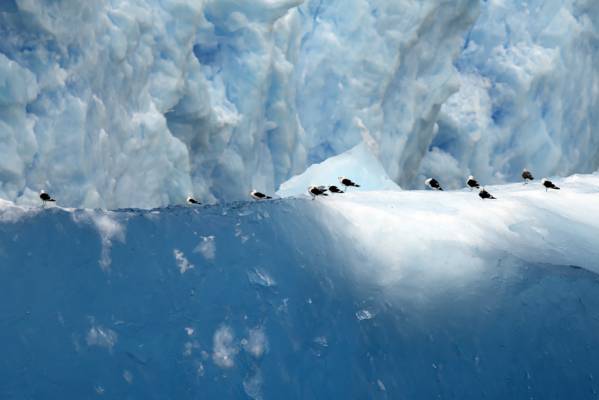 After four flights we finally reached our destination of Punta Arenas, Chile, situated on the north side of the Magellan Strait in deepest Patagonia. Here we joined the Fred. Olsen owned cruise ship Boudicca on my latest speaker tour. Among other things I would be lecturing on the birds and cetaceans of the region. I was accompanied on this occasion by my fellow ecologist and cetacean enthusiast Anthony (Anno) Brandreth. Ship business prevented us from exploring ashore so we had to content ourselves with a session viewing the Magellan Straits from Deck 10.

Brown-hooded and Kelp gulls were much in evidence, as was Chilean Skua, Southern Giant Petrel and South American Tern. Both races of the Imperial Cormorant, Blue-eyed and King, were very abundant alongside the Neotropic Cormorant.  A few Kelp Goose also flew past the moored ship at distance. 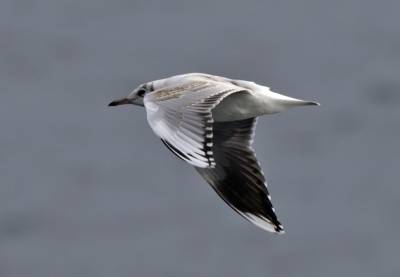 Despite the lowering skies the straits belied their ferocious reputation by being almost flat calm, even so we searched in vain of for Commerson’s Dolphin, we were however thrilled to see our first Sei Whales of the trip.

We set sail overnight and awoke as dawn broke over the ‘relatively’ calm waters of the Northern section of the Magellan Strait. We were soon on deck, and quickly located two ‘fellow travellers’ in the form of Emma Neave-Webb and Russell Neave, both professional naturalists and cetacean specialists. We would become an effective team at scouring the oceans for gems in the coming weeks. In the first few days the stiff southerly winds mostly kept us of the front of Deck 7, limiting the scope for decent photographs of the seabirds and cetaceans. 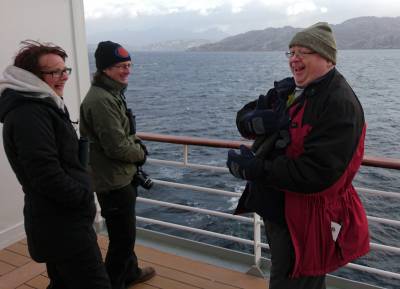 Pretty soon we were enjoying our first Black-browed Albatrosses of the trip, over 100 were observed during the day, together with their Southern Giant Petrel tubenose cousins.  Before long we passed into the first of the Chilean Fjords and picked out a few Magellanic Penguin and the auk-like Magellanic Diving Petrel. The commonest tubenose in the glacial fjords was the Sooty Shearwater. It was amazing to witness how far from the open sea these birds are capable of penetrating through the labyrinthine Chilean Fjords. 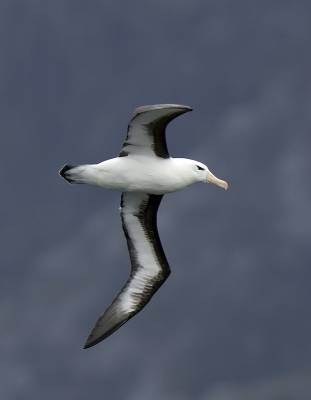 The mountains of the Andes are exceptionally impressive in this region, particularly as we passed Parque Nacional Torres del Paine and the clouds lifted long enough to reveal their majesty, that was duly topped off by the huge form of four Andean Condors that circled the nearest peaks. They were joined by a soaring Southern Caracara. 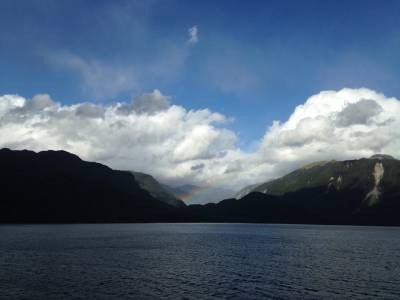 As we wended our way through the fjords the species mix would alter slightly in relation to the proximity of the open sea. Where the walls of these watery arteries narrowed, we would encounter Flightless Steamer Ducks, though rarely within photographic range, as we neared the Pacific significantly greater numbers of Albatrosses and Southern Giant Petrels would put in an appearance. 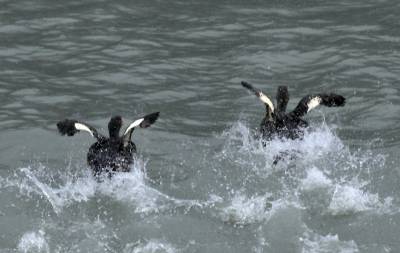 Following my first lecture I reconvened with the others as we approached our primary locality target of the Témpano Glacier, situated in the Southern Ice Field. The ship stood off this Glacier and waited for it to calve a berg or two. A bit of cracking and groaning and the odd small piece fell off but no spectacular on this occasion. 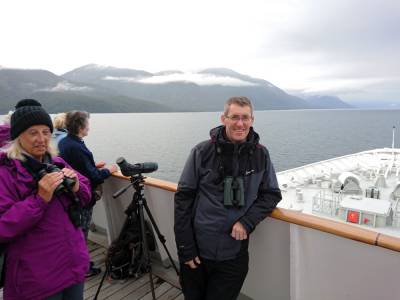 Building a group of enthusiastic nature watchers on Deck 7

A Dark Bellied Cinclodes came out to investigate the ship and we were buzzed by a couple of Green-backed Firecrown hummers as well as the world’s largest Bumblebee Bombus dahlbomii. Apparently the latter is threatened with extinction due to diseases imported with none-native bumblebees.

As we cruised out towards the open sea anticipation grew. We were not to be disappointed! The winds were light and we positioned ourselves forward on deck 7. The ship began to gently pitch as the long rolling swell of the southern Pacific exerted its influence. Bird species variety increased rapidly as numerous Southern Giant Petrels and our first Northern Giant Petrel flew close to the ship. Snowy Wandering and Salvin’s Albatrosses dwarfed the diminutive Wilson’s Storm Petrels and Chilean Skuas marauded the area in search of laden South American Terns. 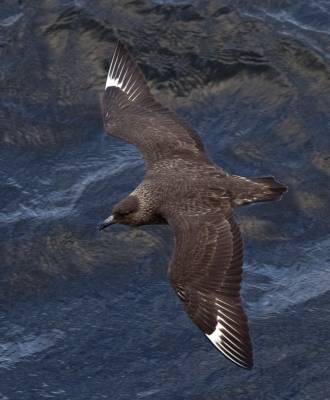 At the oceans edge the blows of numerous whales billowed in the breeze. A couple of Antarctic Minke’s crossed our bow acting as heralds to an avalanche of Sei Whales. For the next couple of hours Sei Whales were permanently on show, mostly at a distance but some came close enough to allow reasonable images of their distinctive dorsal fins. Dusk fell all too soon and the curtain closed on a dazzling show. 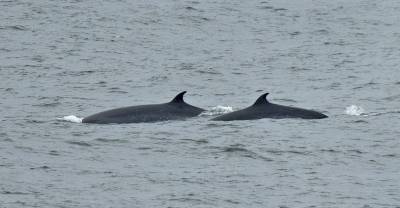 We retired to bed as the ocean surged. Pretty soon we were gripping our mattresses to prevent ourselves from falling out of bed as the roaring 40’s lived up to their reputation.

After the storm our room looked a little trashed, but thankfully we awoke to a calm sea. As we cruised slowly back into the fjord system a pod of tiny Chilean Dolphins played momentarily on the bow. A short time later a Humpback surfaced briefly on the starboard side of the ship. Late morning we reached out berth and dropped anchor at the end of the Estero Elephantes.

From the vantage point of Deck 10 we could distantly see another pod of Chilean Dolphins playing in the tidal rip that marks the entrance to the Laguna San Rafael. We yearned for a RIB to take us in close, but the tour boat that collected us to journey into the lagoon tore past at 40kph and only gave us time to glimpse the hordes of Imperial and Neotropic Cormorants. We also deciphered a few Ashy headed Geese on the banks of the marshes as we roared toward the berg field of the lagoon. Thankfully the throttles were eased back to gently cruise past blue bergs decorated with Kelp Gulls as we approached the wall of ice. The afternoon was rather warm and the glacier promptly fell to pieces in front of us. Impressive! 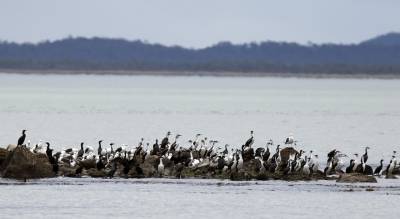 More impressive still was the Leopard Seal that suddenly drifted across the bow of our small boat. I fired off a couple of images between excited human heads. Unfortunately, the boat crew thought it more important to keep on the glacier rather than track this extra-ordinary Antarctic predator.We returned to the ship at equally high speed and the tour boat crew were deaf to our appeals to slow down at the rip to try and get closer views of the dolphins. A largely wasted opportunity of a tour from the wildlife perspective! 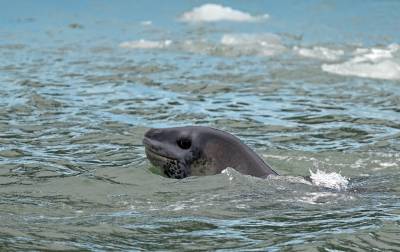 We then had to sit another 24 hours at anchor staring yearningly at the pinprick Chilean Dolphins and Magellanic Penguins trying to get the passengers on to them through our telescopes. 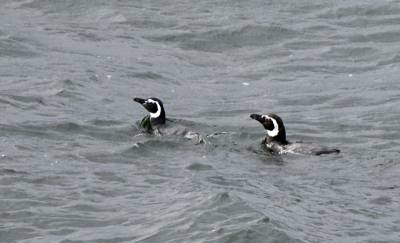