Posted by Jeff Clarke on Sunday, 27 December 2015 in My Blog 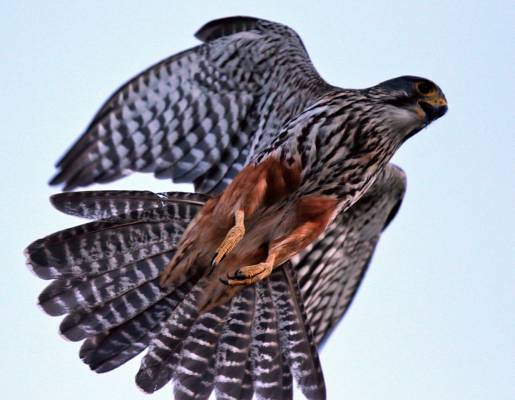 During my recent tour of New Zealand I had been particularly keen to see New Zealand Falcons, partly because I love birds of prey, but also because I’d failed to connect on my previous visit.

Almost half way through our three-week tour we reached Wanaka and we still had not found a falcon. We called at the local D.O.C. tourist office and they suggested a location where there had been recent sightings so, that evening, we set out to a locality near the Hawea River. Our instructions involved a 3km walk out to a site from the local campground. My mate Ian had a foot injury so we gave him a stick to bite on as we toiled toward our suggested location. 2 Hours and 6km later, in failing light, we had singularly failed to find any falcons and Ian was limping severely. As we approached our car, back at the campground, a ‘whickering’ noise caught my ear.

There, less than 100m from our parked vehicles, was a pair of New Zealand Falcons. One of the birds flew to the ground out in the open and I judged there was just about enough light left to get a record shot. What happened next will live long in all our memories. 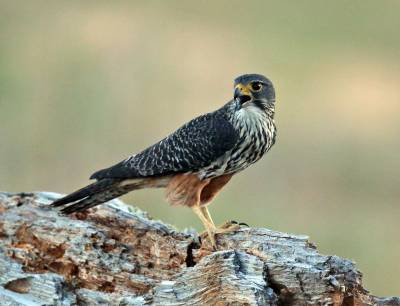 As my wife and I made a quiet approach to the spot where the falcon had gone to the ground the female of the pair gave a yelp from the trees 50 metres away. The male popped up onto a log to see what the fuss was about and moment’s later mayhem ensued as both birds set about the human intruders in no uncertain terms. I attempted a few near impossible flight shots but after about a minute we decided enough was enough. 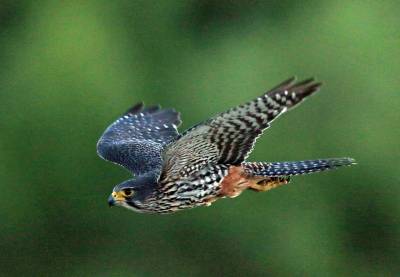 We walked back to where Ian and Liz stood about 80 metres from the trees. At this point Ian was filming with his camera phone. Ian is 6’5” so became the tallest structure in the environment. The falcons decided they preferred a bigger target. I hope you enjoy the video of what happened next. Click the link below.

The lesson from this episode is that New Zealand Falcons are utterly fearless, take no prisoners and have an exceptionally big ‘no-man’s land’ around their nest sites. As we got to about 100 metres from the trees two other people, at least 200 metres away, also came under attack. The final score was Falcons 6 – Humans 0. 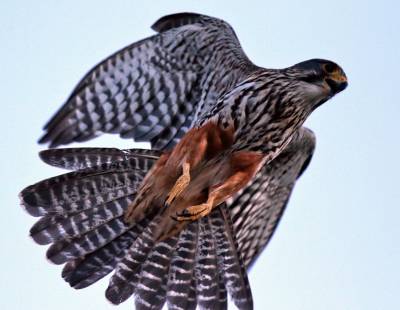