Posted by Jeff Clarke on Monday, 21 December 2015 in My Blog 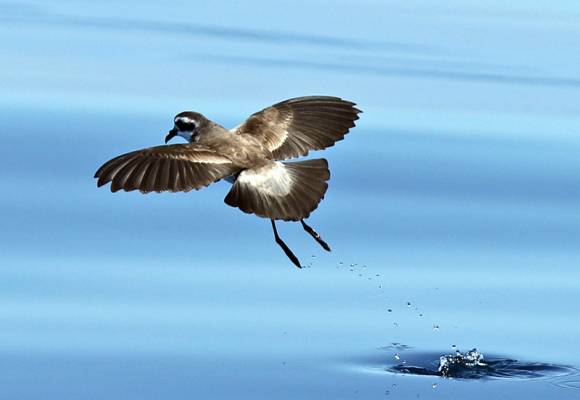 I love my encounters with nature, from the small scale and regular to the big ticket events. Some days stand out for a particular moment, some for the variety of encounters and then you get those rare days when it all comes together. Such was my much anticipated pelagic trip into the Hauraki Gulf with Pterodrdoma Pelagics led by Chris Gaskin.

A ten hour pelagic on a relatively small vessel is a daunting prospect, especially if you are a martyr to sea-sickness, thankfully I had taken the magical Kaikoura Cracker and the benign conditions ensured a comfortable trip. The main danger was sunburn.

We had barely left the harbour at Sandspit when we got out first close look at a Little Blue Penguin. However we couldn’t linger, the plan was to get far out into the gulf, 70km as it turned out, to engage with the abundant seabirds and other wildlife of this stunning location. 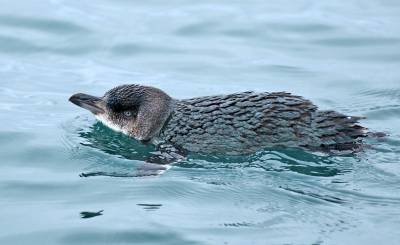 Calm seas made viewing pretty straightforward, though a little breeze would be useful when we were chumming. As we headed for our first chumming destination we soon ran into a pod of Short-beaked Common Dolphin. Even with my 100-400mm lens at its minimum they were far too close to photograph properly as the played on the bow for minute or so.

Just a little further out and one of our primary targets blew loudly at close range on our Port side. The first of two Bryde’s Whales surfaced several times before slipping below the gentle swell for another bout of feeding. It wouldn’t go hungry as the water was stiff with zooplankton. 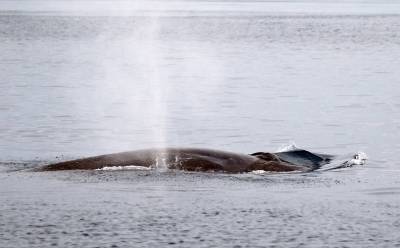 I booked this trip with one very specific bird in mind. A storm-petrel that is so range restricted and rare that only three specimens had ever been collected, the last in 1895. It was long believed extinct until an historic day in 2003 when it was resurrected during a Hauraki Gulf pelagic. Out went the chum in almost calm conditions. Slowly but surely the clientele of birds began to increase, among them Storm-petrels, White-faced Storm Petrels, to be precise, characteristically bouncing across the water like leggy ballerinas. Then seemingly out of nowhere they were joined by a fast jinking black and white blur, back it came and now it was to be seen in its full glory, complete with prominent white stripe on the underwing and the tell-tale streaky dark spots snaking over its white belly. All eyes were anxious to absorb the details of the New Zealand Storm-Petrel; a true V.I.P. at this special pelagic party. To enjoy this bird in intimate proximity was such a privilege and our little band of international birders joined the tiny but growing number of souls who have ever seen this bird in the flesh (or should that be feather?) Thankfully I managed a few passable images to look back on fondly. 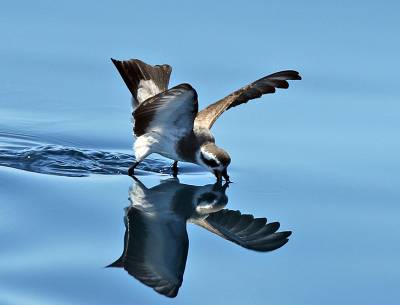 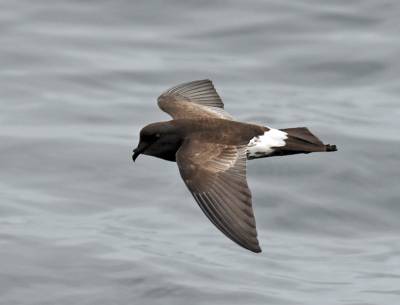 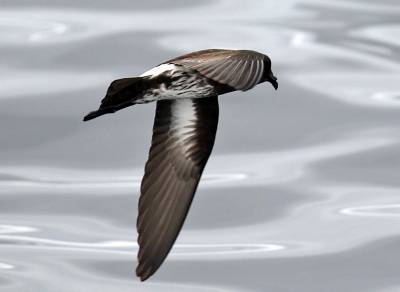 I had anticipated that this would be the high spot of the day, but the Hauraki Gulf had more to deliver. Much more!

The seabirds were around us in abundance and two dark look-alike species Flesh-footed Shearwater and Black (Parkinson’s) Petrel were eager to get their share of the chum spoils. The chum also pulled a few Fluttering Shearwaters into close attendance. A northern hemisphere birder could be forgiven for misidentifying the latter as Manx Shearwater. The auks skittering away from the boat were of course nothing of the sort, they were in fact Common Diving Petrels, a wonderful example of convergent evolution. 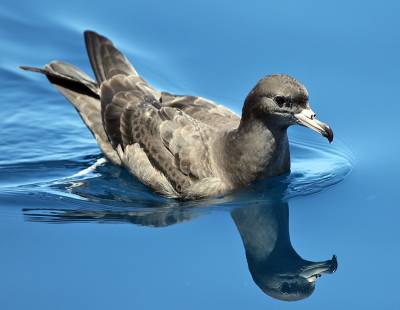 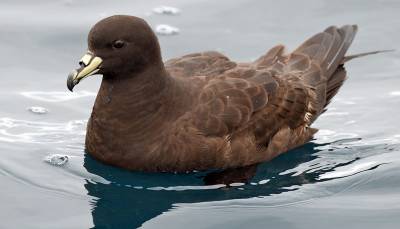 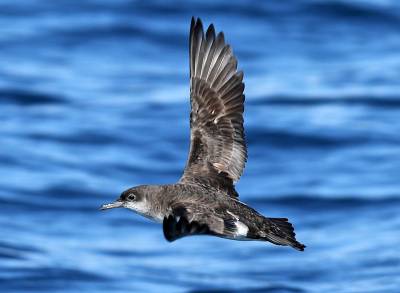 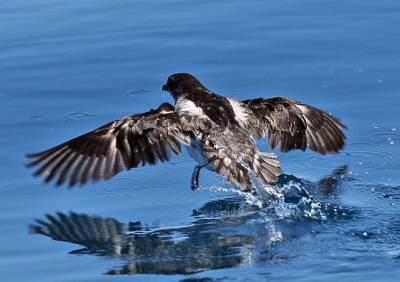 Rather more strikingly marked were the Fairy Prions, Buller’s Shearwaters and Cook’s Petrels. As the day wore and the sun glinted off the sea’s glassy surface I got some pleasing images of the Cook’s Petrel’s. 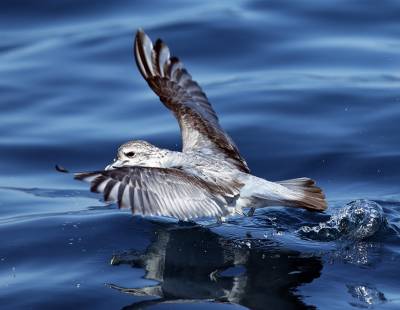 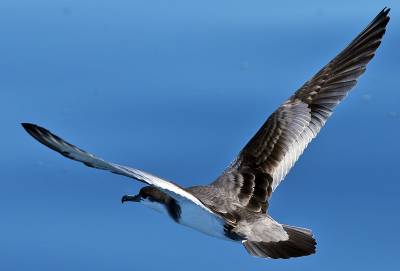 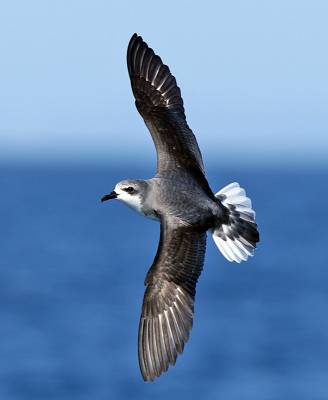 Over lunch we hauled too in the cove of one of the outer barrier islands and here we were treated to the mesmerising sight of a huge shoal of Trevally fish filter feeding at the surface. This created a rolling commotion in the water that attracted the attention of Australasian Gannets and Red-billed Gulls. 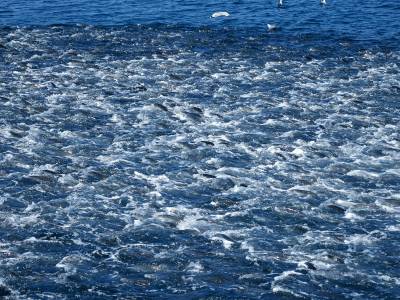 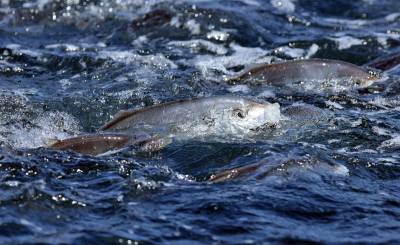 After lunch we explored a number of pinnacles and rocks and for a time we were joined by a wonderful pod of Bottlenose Dolphins that came to find out who we were. The water was so clear you could see the animals graceful movements deep under the surface. 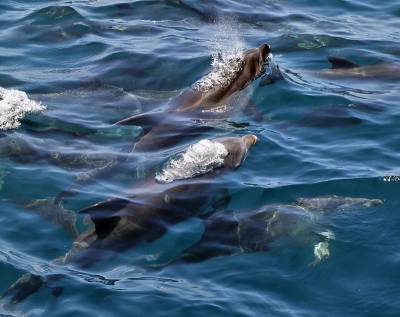 A little while later another fin at the surface proved to be a small shark. It was attracted by our chum bag and as it came in so close we managed a few images that on later examination showed it to be a Blue Pointer, AKA Short-finned Mako. As we approached Little Barrier Island we found another shark. This one was approaching 10 feet in length and even though the water was full of plankton at this location we could see enough to identify it as a hammerhead shark, Smooth Hammerhead to be exact. 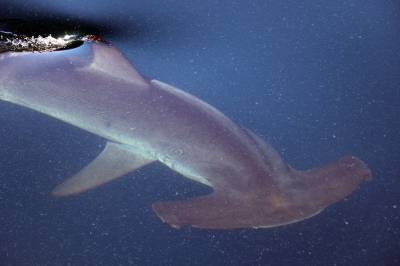 The day still had one more trick up its sleeve. A distant sound like a thousand conversations emanated from an amorphous smudge on the horizon. As we approached closer to the source of the sound thousands of Fairy Prions and other seabirds were converging on the loci of the milling throng. As we gained on the main body of the flock the sound was immense and your vision was bedazzled by thousands of glittering wings. We estimated at least 10,000 Fairy Prions, but it could have been many more, were engaged in a feeding frenzy, mopping up the zooplankton forced to the surface by a mighty shoal of Trevally fish. I’ve seen some astounding things in my time and this was right into the top ten ‘with a bullet’. 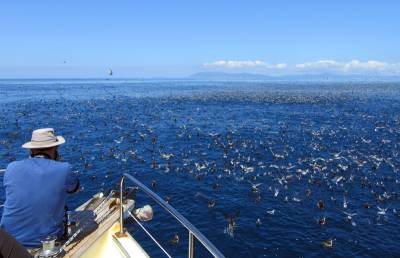 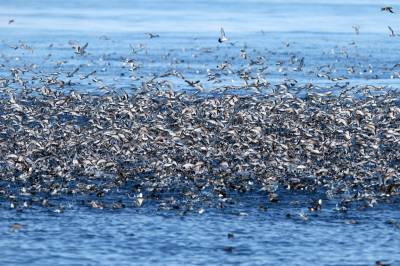 What a grand finale! The Hauraki Gulf had laid on a top class show and saved the best till last. As Arnie famously said "I'll be back!".