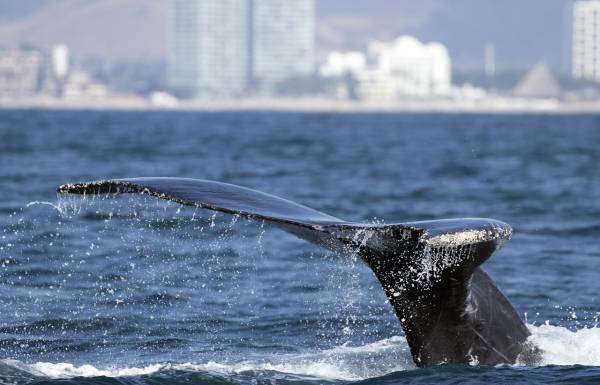 All images are taken on the tour. Copyright Jeff Clarke Ecology Ltd  unless otherwise stated. Click on images to enlarge.

Back out at sea heading up the pacific coast of Central America. We once again gathered a horde of Boobys around the ship, with most again concentrating their feeding efforts on the starboard side of the ship. Much of the time this involved several species, though the composition would change subtly as we steamed northward toward Mexico.

Brown Boobys were by far the most abundant species, but they were periodically joined by Red-footed Booby’s, including one individual in pseudo Blue-footed morph, Masked Boobys were almost ever present when we were well offshore, but picking out the Nazca Boobys proved a challenge and I didn’t take enough confirmatory photographs to positively ID most of them. 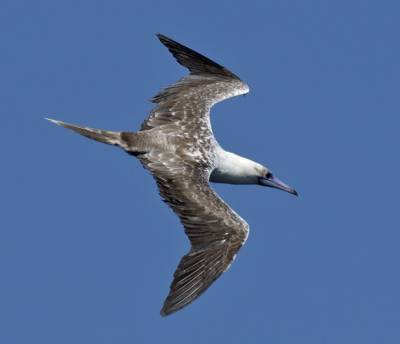 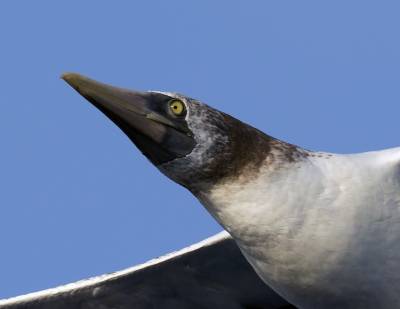 Perdiodically storm-petrels would join the party, including Black, Leach’s and Wedge-rumped. None of the stormies came close enough to photograph properly, thankfully the shearwaters were a bit more obliging. As we travelled further north we did pick up Townsends Shearwaters and latterly Black-vented Shearwaters as well as the rather ubiquitous Wedge-tailed Shearwaters. Frustratingly only the Wedgies close enough for satisfactory images. 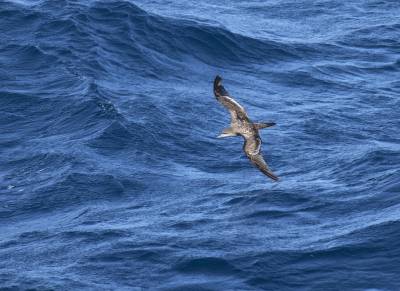 Probably the most numerous type of bird we encountered as we cruised north were Phalaropes, mostly Grey phalaropes. On some days we would see 3-400. We did see Red-necked Phalarope as well but most of the time they were too far off the ship for certain identification. 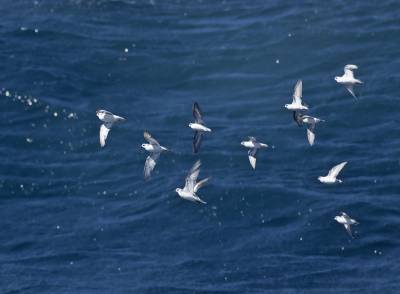 Cetaceans were somewhat more noticeable on the Pacific side of the isthmus, but as usual activity was confined to the early morning and late evening periods. We were also hampered by choppy and at times, rough seas, even so we did get some good if mostly distant sightings. I was surprised by how infrequently many of the dolphins came in to bow ride, in fact on several occasions we observed pods seemingly avoiding the ship, thankfully at least a few of the Common Bottlenose Dolphins did make an effort to bow and wake-ride. But we had to be content with more distant views of the Pan-tropical Spotted and Central-American Spinner Dolphins. Our closest large cetacean encounter came after sunset on the 12th, I’d only seconds before put away my camera when a Fin Whale surfaced within metres of the ship on the starboard side. Typical! 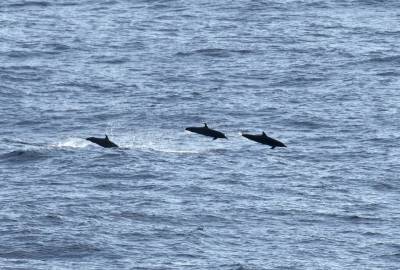 On calmer days, it was often possible to spot Marine turtles, it was one thing spotting them but putting a name to them as more difficult. Eventually we managed identify 3 different species, Green, Olive Ridley and Hawksbill Sea Turtles. Only on the calmer days were they readily spotted any distance from the ship, mostly we were only picking them up as they passed close by the ship. 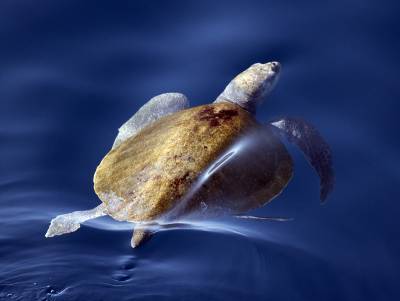 As we headed north the ship picked up a fishing net. A small coastal fishing vessel had laid a net across our path but hadn’t flagged it. We didn’t know it at that point, but this would radically alter our scheduled departure from the ship.

The fishing net had damaged one of the ship’s propeller shafts. As a consequence, we were later into port than originally intended, and the decision was taken to tender the passengers ashore. Today we would be joining a small vessel to go whale watching, principally for Humpbacks. As it was, we had good views of several Humpies as we cruised into the bay. All the passengers were wowed by a mother and calf Humpback close into the shore at the port. Later we would have a magical close encounter with this duo.

I was the escort for the trip and pretty soon we had joined the Zodiac Whale Watching boats. Within minutes we connected the mother and calf and a an intimate few minutes in their close company. They were calm in the water. It was good to see the boat operating ethically and not harassing the whales.

We progressed a little further out and had great views of a whale in active mode, giving us a very adjacent encounter and a chance to get the classic fluke shot. We then had quite a long gap without a whale sighting. We were just thinking “is that it?” When boom!! We struck gold and became witnesses to one of the thrilling spectacles of Humpback life ‘The Heat Run’! 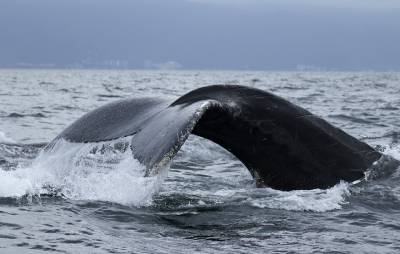 At least 7 males vied for the right to mate with the female. As she put them through their paces they barged and belly flopped on one another, one whale trying to prevent another from taking a breath. All very dramatic. We followed the action for over half an hour, the whales moving on an erratic course. It was ongoing as we left. Our time was up. 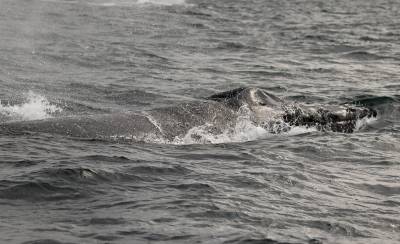 Once we returned to the jetty and had people safely back on the tender, I took a few minutes to photograph the Heerman’s Gulls and Blue Boobys. 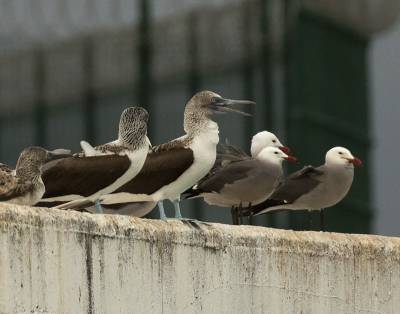 On returning to the ship it was a surprise to discover that the damage to the propeller shaft was so great that we would be having a complete change of itinerary. No more Mexico, the ship would need to head direct to San Diego, only thing being I was due to get off in Mexico two days hence and now I’d be on board an additional 4 days! Eek, some urgent emailing helped sort out my business commitments.  I had to hope there would be some compensation for missing out on some of my Mexico plans. I need not have worried!

We crossed the mouth of the Sea of Cortez and began to track up the West coast of Baja California. That morning I’d alerted passengers as to the whale and dolphin possibilities. Some Pantropical Spotted Dolphins and a pod of Spinners whetted the appetite. One particular passenger, Jackie, had really caught the bug and spotted a huge blow. The whale had sounded ahead of the ship on the starboard side. We waited in anticipation for its next surfacing. Boom! A mighty blast of water vapour and snot erupted close on the starboard side.  A turquoise shape moved under the water, rose to the surface and blew again. We already suspected its identity and then it rolled and sounded, I heard myself exclaiming "IT'S A BLUE!" Heaving its body higher, the grey mottled skin, tiny stub of a dorsal fin and up come the flukes. A mighty Blue Whale. Jackie was moved to tears. That is the emotional high you get when you see your first Blue Whale! This was the start of a remarkable day. Within just a few hours we had recorded 10 Blue Whales on the starboard side and another was observed on the port side. This included the biggest whale I’ve ever seen, an enormous female with a calf. She was a minimum of 90ft in length, just colossal! 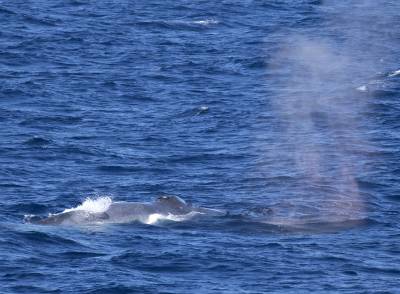 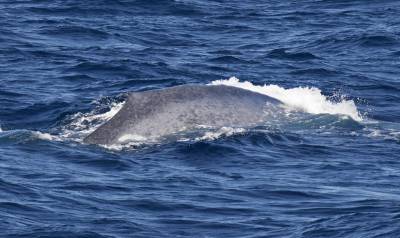 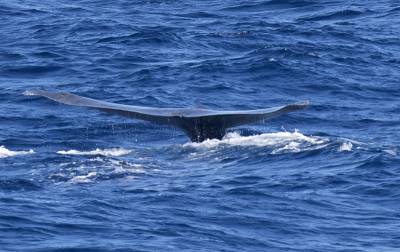 Rough seas returned on the 16th and 17th limiting cetacean sightings, but the bonus was being able to add another Albatross to my growing life list of sighted species. Laysan Albatross became my 11th confirmed species. Half-way to my ambition of seeing all the world’s albatross species. During this same period we were also seeing Black-footed Albatross. By the end of the 17th I’d seen seven of each.

The 18th, our last day at sea, finally brought calmer seas and some great sightings, most notably my 39th species of cetacean, in the form of Grey Whale. By the time we reached San Diego at least 11 had blown and shown by the ship. Including animals well inside San Diego Bay itself. Offshore of San Diego were thousands of Black-vented Shearwaters, but I’d accidentally altered my camera settings and my images were terrible.

As we entered the bay we were entertained by couple of small pods of Pacific White-sided Dolphins, that briefly came to the bow and also a few Short-beaked Common Dolphins surfaced but kept a low profile. There was also a large variety of birdlife immediately obvious including Western Grebes, Pelagic and Brandt’s Cormorants, Surf Scoter and waders along the shoreline included Marbled Godwits and Willets, alongside a flock of Black Brant. 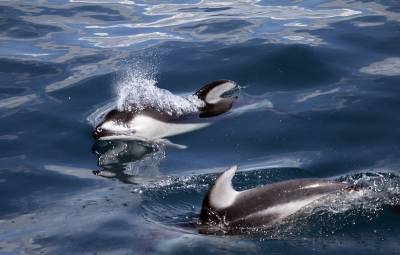 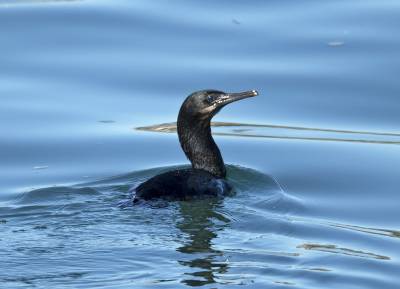 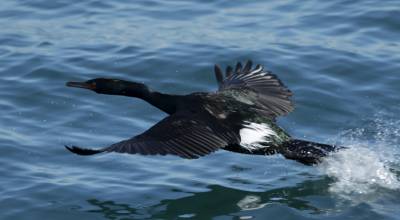 Once ashore Adele and I decided to walk up to Balboa Park. It always amuses me when you talk to Americans, they think you have lost your mind if you suggest walking anywhere. It took us 40 mins to get there, but on the way the grim reality of the USA policy on social welfare came into stark relief, we lost count of the number of homeless people, including dozens rough-sleeping in the park itself. It was a shocking thing to see in the richest country in the world and a damning indictment of Trump’s America!

The park itself had many birds, but we only had a limited time to explore a relatively small part of it. A large party of Bush Tit’s (an almost direct replacement for Europe’s Long-tailed Tit) noisily explored the dense areas of shrubbery, whilst the occasional Anna’s Hummingbird fizzed about. The bird I spent most time photographing was the lovely Western Bluebird, it took a while, but I eventually got some pleasing portraits. As we headed back to the ship, we passed through Waterfront Park where a Song Sparrow sang, just begging to be photographed in the setting sunshine. 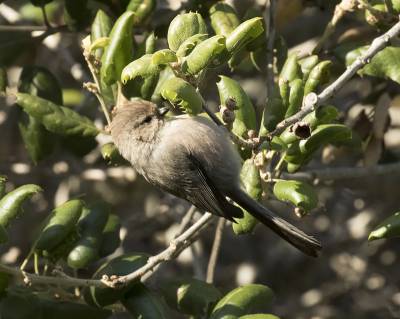 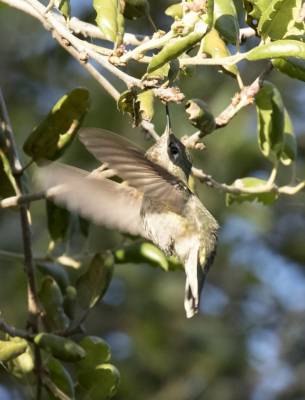 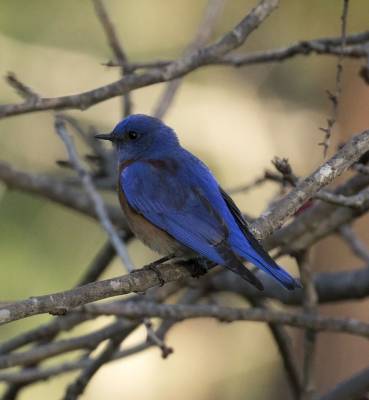 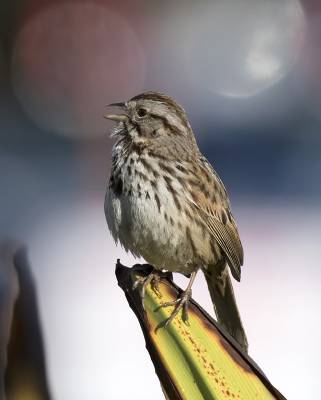 19th Feb 2019
Our last day, but we wouldn’t be catching the plane till the evening, so we had time to take a whale tour. We chose the company Flagship with Birch Aquarium at Scripps as we knew they would operate ethically. We jumped on board and headed out to enjoy some close encounters with the Grey Whales, a quietly operating young animal, benthic feeding in shallow water, was well inside the bay entrance. But we spent most time observing a small group of larger animals, probably a group of non-breeding age animals, a little to the north of the bay. There carbuncled skin, full of whale lice, was clearly in evidence at such close range. The ‘V’ blows were also clearly seen. As we cruised slowly back through the bay we got reasonable views of the loafing California Sea Lions 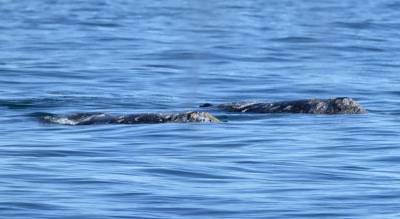 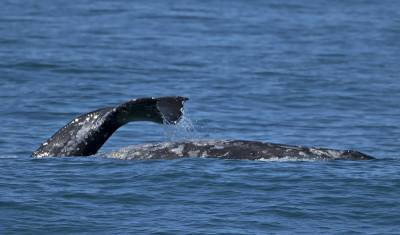 After a short refreshment break, we still had time for one last foray into the nearby Embercardero Marina Park North, given its rather urban setting and manicured look it was really quite productive. The marina itself held a variety of birds including Black-necked (eared) Grebe, American Coot and Red-breasted Merganser. By far the commonest bird in the park was Audubon’s Warbler, they seemed to be pretty much in every bush, that didn’t mean they were easy to photograph due to their restless nature. In contrast the Black Phoebe’s were much more obliging, perching prominently and at length as they waited to snaffle a passing insect. 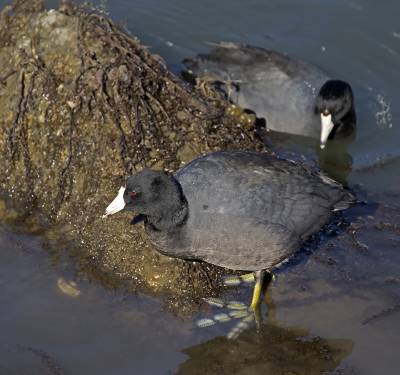 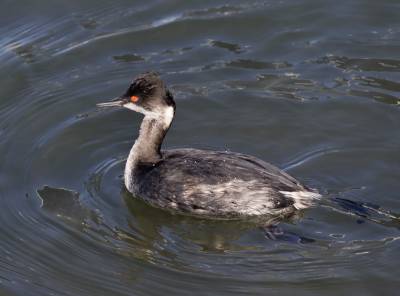 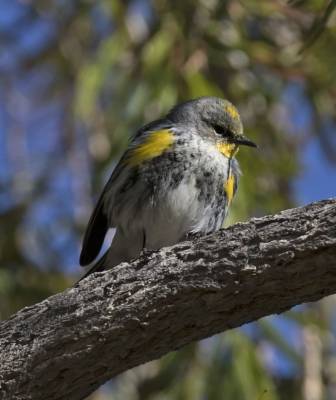 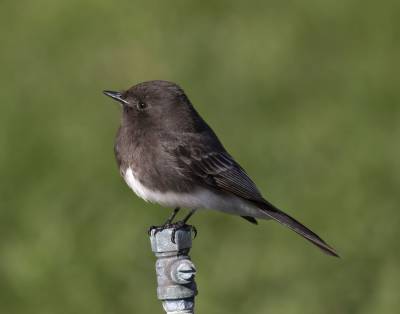 Time was up. Back to the ship, final disembarkation preps and away to the airport. It had been a fabulous trip, full of memorable sightings and it certainly gave me a taste to pass this way again in the near future, hopefully next time I’ll get to spend a little longer in Mexico!

Acknowledgements
I'd like to thank the following organisations and people for enabling and enriching this experience. My agents at Peel Talent; Fred. Olsen Cruise Lines; the crew and staff of MV Balmoral, Adele Clarke