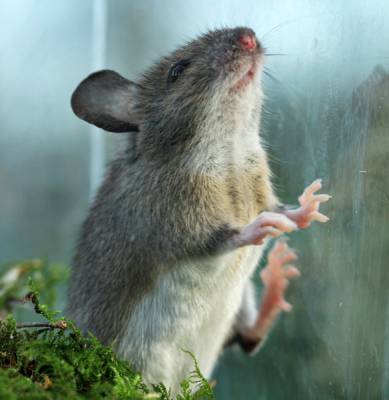 We gathered at a private location in the south of Cheshire. In total 6 of us were there to put out the traps in three blocks. We worked fast and hard, but despite this we were beaten by the rapidly fading light and in the end we got 200 traps down.

The following morning we gathered shortly after first light and began the process of bringing in the traps and processing the mammals we had captured. The site didn't provide optimal trapping habitat and so it was not a surprise that only 1 in 4 traps had been sprung. Many Wood Mice and a few Bank Voles later, I prepared to tip another mouse into the handling bag. It was already lively in the trap and as soon as it dropped into the bag it went off like a rocket, bouncing in all directions. I restrained it and saw a large yellow gorget stretching right across the lower throat and upper neck area and thought, "yep, we have a Yellow-neck". Unlike most mice I handle it regularly squealed and when Jack put his fingers near its gorget it wasted no time in sampling his fingers with its teeth.

I showed it to Paul and the others and we had a some cautious doubts because the body colour didn't match our expectations. This was a young animal, though it was still as big as an adult Wood Mouse, and its upper fur was rather grey-brown and not the usual orangey-brown of YNM. We pretty much convinced ourselves it was just an extreme variant of a Wood Mouse with an extra large gorget, but a niggly doubt meant we retained the animal for some photographs.

Having completed the retrieval of the first two batches of traps we spent some minutes taking pictures of a known Wood Mouse, our strange variant and a Bank Vole. We couldn't linger as we still had other traps to retrieve. The highlight from the final batch was a Pygmy Shrew, a bit of a surprise from a wooded setting.

Once home there was time to go through our images and I was immediately struck by a number of features on our variant Wood Mouse. I posted my images to Paul and we soon concluded it was indeed a Yellow-necked Mouse but we would need the images peer reviewing. Through the power of the internet we soon had our answer our experienced respondents all agreed, Yellow-necked Mouse!

so in our very first attempt we had found our target. Now all we have to do is its plot full distribution in the county. We won't know the real answer until we have expended a whole lot more time and volunteer effort and laid down several thousand more traps.
Cheshire Mammal Group also have a blog about their recent exploits. Read it here
You can also visit the Cheshire Mammals Facebook page.