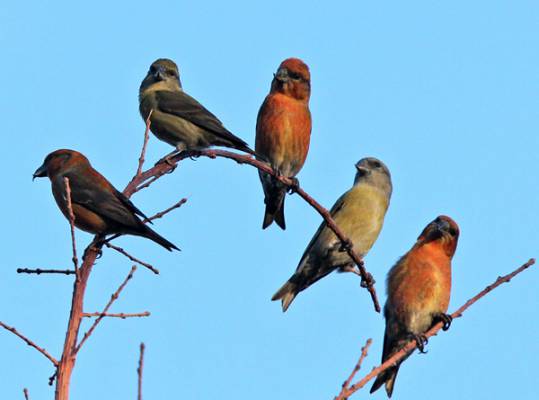 We walked about a mile, pishing occasionally to bring in more flocks of passing Common Crossbills and in so doing managed a few semi-decent images. Clear enough to show the finely pointed, deeply crossed and well projected mandible tips.

After just over an hour we returned to the larches and within a few minutes we connected with a small group of Two-barred Crossbills, daintier with more parallel finely pointed bills, than their Common cousins. The double wing bars were very obvious, as were the spotted undertail coverts and rather variegated mantle and scapulars. Their calls were rather distinctive, especially the diagnostic 'toot' trumpet-like call. We spent a fair amount of time with these birds but photographing them was nearly impossible. Backlit, high in a barely illuminated and 'messy' canopy was not conducive to securing good images above record shot standard.

It was now decision time, do we press on for the Parrots, or do we stay and keep trying for better images of the Two-barreds? Given how high the Two-barreds were feeding we elected to head for Budby Common in North Notts and to try and connect with the Parrot Crossbills I had found 3 days earlier.

Parking at Budby was at a premium. It's rare to see another birder here but today was different as dozens of birders sought the, aptly named, Parrot Crossbill, adorned with their, oversive, 'Swarzeneggeresque' mandibles that are reminiscent of a parrot, save for the crossed bill tips. We strolled across the heath in a now rather diffuse light and soon encountered a group of birders enjoying the feeding flock of 13 birds in the top of a small Scot's Pine about 80 metres distant. Group etiquette ensured a 'no pishing' policy, so no close views, but we did enjoy the sight of these birds plucking pine cones and working them at their leisure. We thought we might intercept them at their favoured drinking pool but we mistimed our arrival and ended up with only a poor flight shot of a female as the group rapidly departed.

In the meantime my companion Anno had contrived to fall down a cattle grid, to the collective 'ooh that's got to hurt' comments of his fellow birders. But you know what they say "no pain, no gain" and today we did the Crossbill hatrick and Anno's bruises aside we enjoyed a cracking day in the field with some charismatic quirky finches.