The Roar of Borealis

All images in this blog are copyright © Jeff Clarke 2021 Click on the image to view at full size.

After a sixteen-month hiatus courtesy of COVID-19, I finally got back out on the ocean. I had the good fortune to be selected as a guest speaker on Fred Olsen’s new ship ‘Borealis’, on one of her first outings.

Our original itinerary to Shetland and Orkney had been scuppered when a certain person in Holyrood decreed that folk from Greater Manchester were ‘unclean’. And so it was that we found ourselves setting out from Liverpool on a southerly trajectory instead. It was a lovely calm evening and Deck 6 forward on Borealis provides an ideal platform for searching out cetaceans and seabirds. The waters here are exceptionally shallow so it was no wonder that we only spied Harbour Porpoise, 11 of them, before darkness fell, preceeded by a lovely sunset, just as we were approaching Anglesey.

I was up at sunrise to make the most of the benign conditions and as we processed down the St. Georges Channel a succession of Common Dolphin pods appeared, with some dutifully coming to cavort on the bow and in the wake of the ship. By end of play some 170+ had been counted. The highlight was probably the pod of 12 Risso’s Dolphin, that appeared in the Celtic Deep off Pembrokeshire. Risso’s are far less demonstrative than most dolphins and this group were typically languid in the placid waters of the Irish Sea. The giveaway is their high arcing fin and the rather whitened appearance in front the dorsal fin. If you are lucky, you may spot the strangely blunt head with a vertical crease in the middle of the forehead. 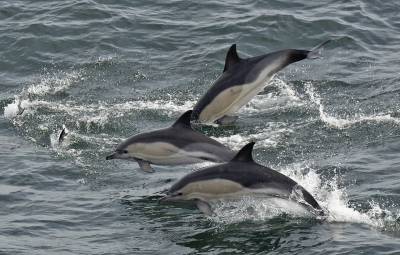 Common Dolphins head for the bow of Borealis 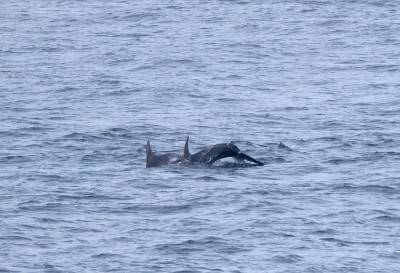 Rather surprisingly we only saw one Minke Whale and that was rather distant.

By the time I resurfaced from my talk, the weather was beginning to deteriorate and the Manx Shearwaters that had hitherto been working hard were suddenly skipping over the waves, careening up over the crests then plunging into the trough. Shearing for all they were worth.

It was apparent that most of the auks had now left the nesting cliffs and the sea was thick with Guillemots and Razorbills. High-pitched calls marked out the juveniles that were being chaperoned by the male parents. 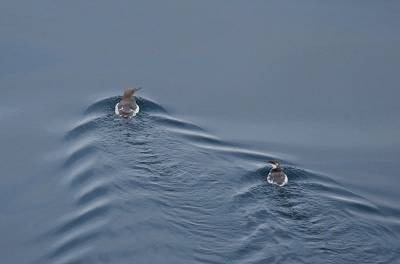 On Saturday 24th we were due to be in Falmouth. We were not there long. The inclement conditions prevented tendering and the decision was made to head for the Channel Islands for some scenic cruising. My second talk was brought forward and after lunch I made it back on deck. Somewhere in the murk were the Channel Islands, a close pass of Guernsey, followed by Alderney and Sark, every now and again the clouds would lift momentarily, and the heavy rain would abate, to give us tantalising glimpses.

Ephemeral images flickering over the waves proved to be shearwaters, in the gloom I felt they were not right for Manx, they looked too dark on the underparts, flapping flight was much more continuous, structurally they looked a bit neck heavy and pot-bellied. It all added up to Balearic Shearwater and eventually we got a reasonable view of a group heading across the bow. My instinct was right. In total we counted a minimum of 120 but there were probably many more than that, as several hundred distant shearwaters couldn’t be definitively named but their flight and structure was consistent with this threatened seabird. I got the worst of record shots in the heavy rain and hopelessly dark conditions. 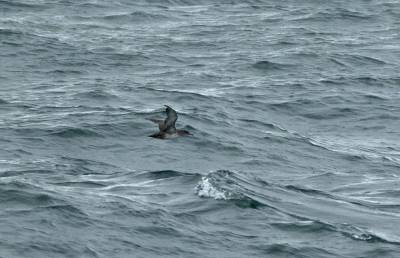 At the current time, COVID-19 guidelines prevent anyone going ashore except on organised excursions. So, the 25th in Portsmouth passed with minimal wildlife watching.

The 26th was very different, I was up at sunrise, just in time for Borealis’s passage around Lands’ End. Calm conditions had returned, as had the Common Dolphins. Bird-wise the highlight was a lone Cory’s Shearwater along with a handful of Balearic’s and hundreds of Manxies. After breakfast my organised Wildlife Watch gave us more dolphins and it was with keen anticipation that we headed for the general direction of the Pembrokeshire Islands of Grassholm and Skokholm. The numbers of Gannets passing the ship rose exponentially and all things looked good when we entered a fog bank so thick you could barely see the bow. It would be two hours before we re-emerged. 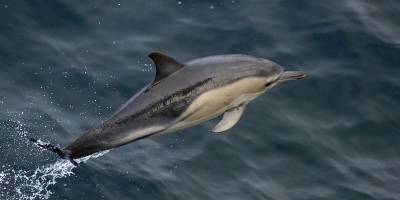 We were just finishing lunch and the fog thinned enough for my partner, Laura, to spot some fins in the water of the port side of the ship. Luckily, we had taken our binoculars into the restaurant with us. Pretty soon we had a bunch of diners watching a small pod of Risso’s Dolphins.

We headed out on deck and the sea was thick with birds, mainly auks and Manx Shearwaters, the sea was glassy, and the light was good, so I spent a while trying to get some better shots of the shearwaters. 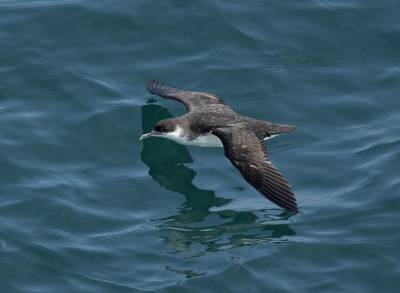 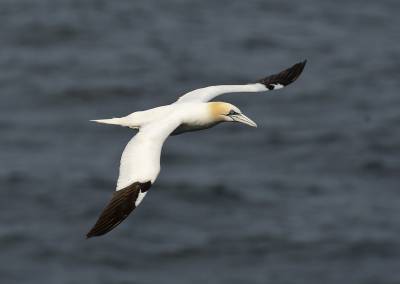 After my fourth and final talk, I was back on deck. We were still in the St Georges Channel, mid Irish Sea and just short of Anglesey. Over the next couple of hours we hit a rich seam of Minke Whales, 18 in total, the last coming as we drew level with Liverpool. 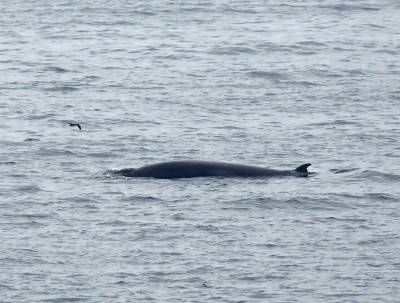 We continued to steam north and after the evening meal we were back on deck in search of more cetaceans. By the time sunset fell just south of the Isle of Man we had added two more Risso’s, 28 Harbour Porpoise and two Basking Sharks. The total number of Common Dolphin topped 200. If only the fog had not descended in what is possibly the most productive bit of the Irish Sea. But can’t complain it was a very special day all the same.

The 27th of July would be spent cruising some west coast Scottish isles. Hopes were high, the sea was calm, but it was a bit misty and murky. It was still very atmospheric though, especially as we passed the Small Isles and Rum. Common Dolphins were a little thin on the ground, but the Minke Whales were reasonably easy to find and the calm conditions certainly aided our ability to spot Harbour Porpoises. I had 4G all day, so I was easily able to plot our cetacean sightings. By the close of play we had recorded 11 Minke Whale, including one spy-hopping, 60+ Common Dolphin and 54 Harbour Porpoise. 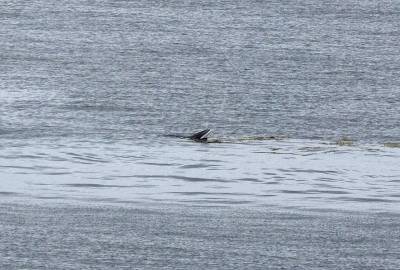 The following day we awoke in Belfast Harbour. Common Terns and Black Guillemots were busy still feeding young and would pass the ship’s berth periodically, while Harbour Seals lounged on the rocks and Hooded Crows mooched about. 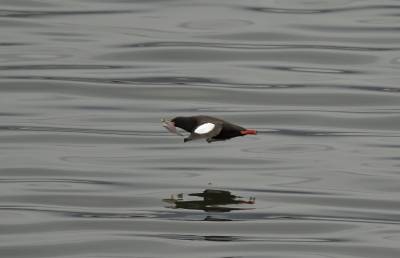 As we left that evening, we had another feast of Manx Shearwaters, but the weather quickly deteriorated and we failed to find any more cetaceans.

It had been a rejuvenating experience to be back out on the salty water. Though species diversity was on the low side as far as the cetaceans are concerned, the numbers were terrific. In total we recorded over 500 Common Dolphin, 20+ Risso’s Dolphin, 94 Harbour Porpoise and 30 Minke Whales. Very few people who wanted to see a whale, failed to do so, and pretty much everyone had mesmerising views of the Common Dolphins porpoising towards Borealis’s bow. The birds were no less impressive, with countless thousands of Manx Shearwaters providing a genuine spectacle.

I’d like to thank the following organisations and individuals who helped make this truly enjoyable cruise so rewarding. My agents at Peel Talent, Fred Olsen Cruise Lines, the incredibly hard-working crew of Borealis, the passengers who were lovely and joined in the Wildlife Deck Watches in their droves, and finally to Laura, who won her Basking Shark spotter’s badge.