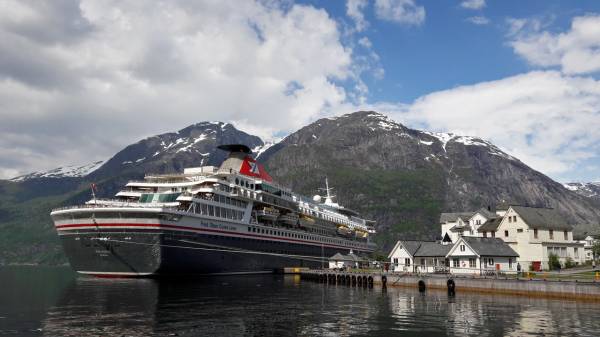 I just completed a wonderful little gig as a speaker on a five-night cruise to the fjords of southern Norway. It was a last minute thing and I’d had no time to plan any wildlife excursions so went with few expectations.

My Wife and I joined the Fred. Olsen cruise liner Balmoral at Newcastle on the 25th May.  Setting off in the early evening. My official duties prevented me from much in the way of observations that evening but I was up and out on deck very early on the 26th.  As anticipated Gannets, were very much to the fore, backed up by smaller numbers of Fulmar and Kittiwake. I carried out my first speaker duty and returned to my watch at the front of the Balmoral. By early afternoon we were approaching the Norwegian coastline when the first of 3 Minke Whales showed well in the calm seas. The warmth of the air reduced the visibility of the blow. 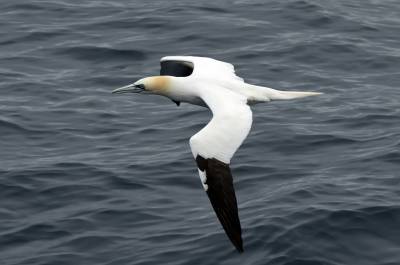 Gannet from Balmoral off the coast of Norway © Jeff Clarke

Jetsam was very much in evidence on this trip and it was a huge disappointment to see so many balloons floating on the surface. The one featured here is from McDonalds and says, “Happy Meal”. It won’t be a happy meal for a turtle or a dolphin! I use all of these cruises to get the message across about pollution in the seas and how to avoid it. 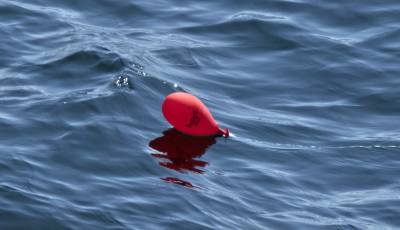 The NOT so 'Happy Meal' McDonalds balloon in North Sea. May 2017 © Jeff Clarke

The evening was spent scenic cruising in the beautiful Lysfjord. Distances to shore meant few birds were observed well, though we did add Black Guillemot to the trip list. Shortly after passing the famous Pulpit Rock the huge form of an adult White-tailed Eagle crossed our path. I managed to get many people on to this impressive bird. 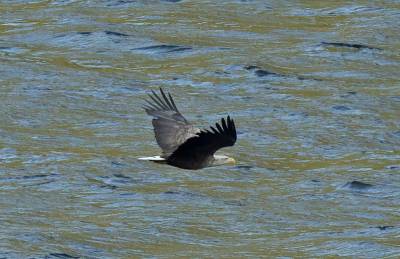 We also watched the Coastguard Rescue helicopter retrieving a crashed paraglider from a virtually vertical area of cliff.

On the morning of the 27th I was up at dawn to search for wildlife as we cruised through the myriad of small islands towards Bergen. After an hour and half I’d seen very little, then far in the distance I spied an unmistakeable fin breaking the surface. My pulse quickened, my gamble had paid off suddenly there were many fins and blows breaking the mirror calm waters, Orcas!! Just one other person was with me to enjoy this majestic spectacle. As is so often the case they passed the ship with the sun in my face. They were close enough to hear the exhalation of their blows. At least 15 animals were involved, including 3 mature bulls. A pod of this size and their activity suggested they were fish-eaters. This would surely be the highlight of the trip. 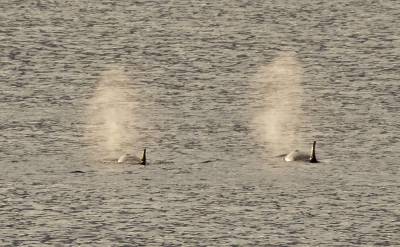 Later that day Adele and I took the cable car to the top of Ulriken. Here above the tree-line we found several Ring Ouzel, alongside Wheatears and Meadow Pipits. We also came across a remarkably tame Hooded Crow. I watched it attempting to steal food from stowed packs of some walkers. A very canny bird! 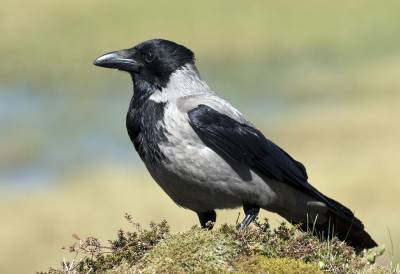 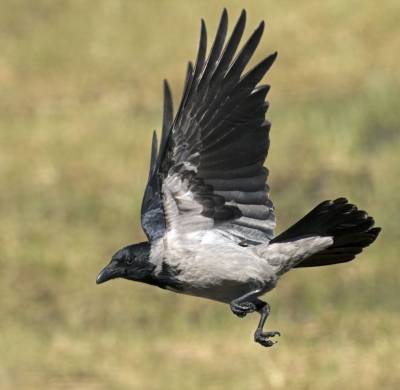 Hooded Crow at the top of Ulriken in Bergen © Jeff Clarke

The rest of the day was spent in the lovely own of Bergen and I busied myself for a time photographing the Common Gulls and the ‘Scandi’ Lesser Black-backed Gulls on the Lille Lungegårdsvannet.

On the 28th we awoke at dock in the lovely Eidfjord. We spent a relaxing day walking around the village and a cracking little circular walk taking in river, forest and farmland. The highlight of the walk was undoubtedly the incessantly singing Icterine Warbler. It chucked in so much mimicry that it sounded like 10 species singing from the same spot. It kept high in the canopy and I never managed a photograph. The White Wagtails around the farmsteads proved far more co-operative. 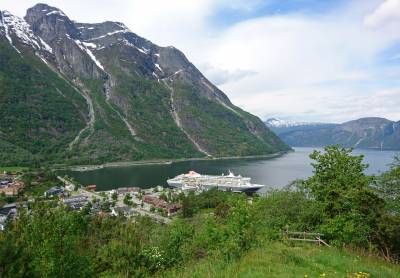 Balmoral in the Eidfjord © Jeff Clarke 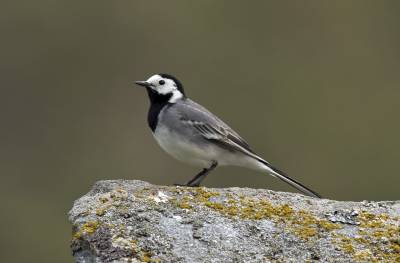 We sailed at 4pm and spent the rest of the daylight hours cruising Hardangerfjord, Maurangerfjord & Furebergfossen. I messed up photographing a White-tailed eagle that flew low over our bow. The sea-duck were mostly distant but at least one Common Eider did come close enough to photograph. As we cruised along we finally got our first Harbour Porpoise of the trip carrying out its characteristically quiet roll-over at the surface. We were still in the fjord system as dusk fell. 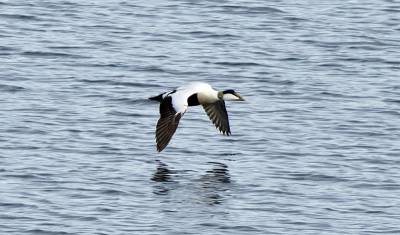 I noticed a jiggle in the boat movement in the early hours signalling our emergence it to the North Sea. An early sojourn around the decks revealed migrant Northern Wheatear and a Collared dove aboard the ship. Otherwise things were quiet. It was a bit lumpy first thing and some passengers were feeling iffy, even so I had a good 300 or so passengers for my second talk. By mid-afternoon the sea had calmed considerably and back out on deck it became possible to spot more than Gannets and Fulmars. A few Manx Shearwater careened on to the list together with a few Puffins and Common Guillemots. 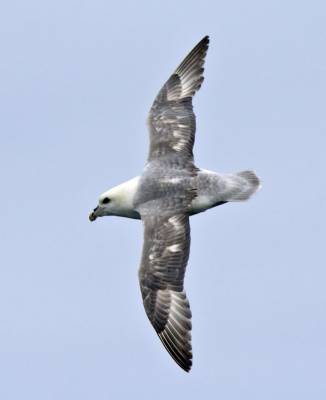 A pod of Harbour Porpoise was the first of our cetacean action, we saw at least 12 over the course of the afternoon. I was just suggesting we should be seeing Minke Whale when Nick, one of the passengers, said he’d seen a fin break the surface. We watched intently. Had it slipped by unnoticed? Without warning a full grown Minke Whale rolled close to our starboard side, it was too quick to even lift the camera and it never resurfaced. 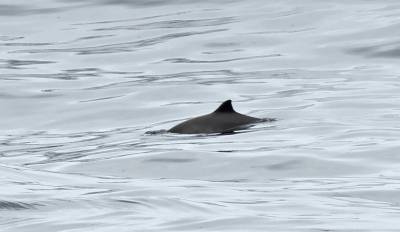 This was followed by a very strange incident (in between more balloon photography), as a fulmar slipped past our port side I noticed an object lying flat in the water. It wasn’t very large but assumed it was a seal. I stared at it intently though my bins for about 20 seconds. By now it was less than a 10m off the port side of the ship. It put its head up briefly to reveal a point little face with a pale muzzle, then promptly rolled below the waved leaving its long, dark brown and furry, slender tail till last. I could barely believe I’d just seen an otter out in the middle of the North Sea, but Adele was with me and she saw it too. As did another passenger. It’s actual position was at 5.6o, 52’.1” North; 0o, 53’.4” East; which puts it some 117 miles from land. I couldn’t relocate it when I shot down the side of the ship to try to spot where it came up. It seems so unlikely and I cannot find any records of an otter that far out to sea, but we had just come through several fishing vessels and I did wonder if it had got aboard one and departed the trawler miles out to sea. It all seems completely highly improbable, but I know exactly what I saw. 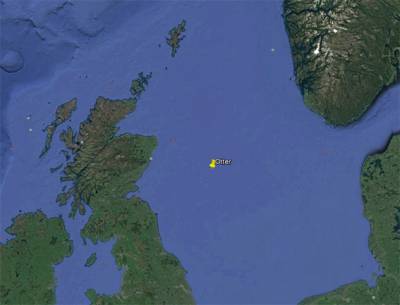 Our final action of the day came after our evening meal. Adele and I grabbed our bins and headed out on to deck for a final check as dusk began to fall. Lo and behold a small pod of White-beaked Dolphins were jumping about in the distance complete with a retinue of diving Gannets. A cracking end to a great little trip.