At the end of February, I took my Birdcraft group to one of my favourite parts of the UK to enjoy the ornithological delights of Dumfries and Galloway. It’s the perfect destination for an avid gooseoholic and where better to begin than the flatlands of WWT Caerlaverock.  I was aided and abetted by two birding buddies in the shape of Messer’s Anthony (Anno) Brandreth and Paul Hill. We overnighted at the Caerlaverock farmhouse, which gave us the opportunity to enjoy the nocturnal Badger activity, before spending the day admiring the fine selection of wildfowl and waders wintering on the site. 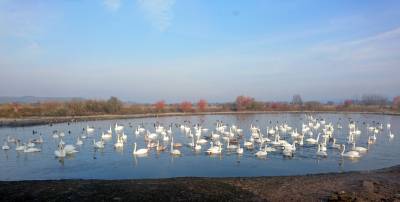 In late winter Caerlaverock is home to large numbers of Whooper Swans. As always it was great to see them at close quarters, on the appropriately named ‘Whooper Pond’, mixed in with their Mute cousins. Personally I enjoy the fact that they approach so close as the commute to and from this area giving you a chance to get a flight shot or two. 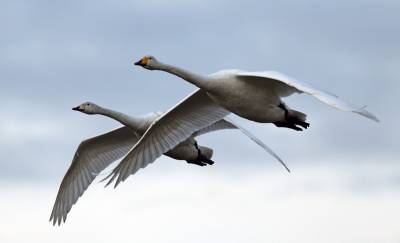 Dabbling ducks tend to dominate at this reserve as most of the water bodies are shallow and we were fortunate to pick out a Green-winged Teal on the folly pond among its abundant congeners.

The main draw at this time of year is without doubt the Barnacle Goose. This is arguably the UK’s most attractive regular goose species and its combination of guttural barking calls and contrasting plumage make it so distinct from its blander looking relatives. We would see this species many more times over the weekend. Other highlights during the day came in the shape of a ghostly male Hen Harrier, hundreds of spangled Golden Plover, including some entering summer plumage, an elusive Water Rail and a stoat that bounced around as if made from ‘superball’ rubber. 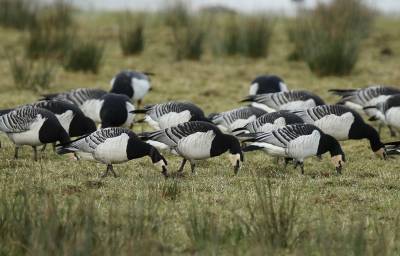 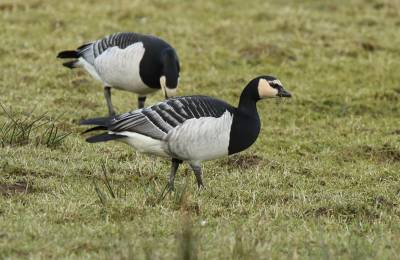 A 'Barny' in pristine condition

On Sunday we awoke to sparkling sunshine in the little harbour town of Portpatrick. A short walk from the hotel and we were admiring a truly beautiful scene. A dozen or more Black Guillemots, some still transitioning from winter plumage were busy displaying and calling in the little harbour. Everyone was transfixed and the waters were so calm it was possible to observe the courting pairs flying underwater in their pre-nuptial cavorting. 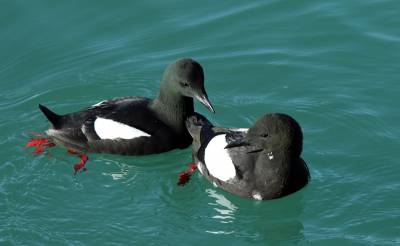 After a time, we dragged ourselves away and looked out across the sea to Ireland, which looked so clear and so close you could almost touch it. A becalmed Irish Sea was full of fulmars and Red-throated Divers and among them we spied several distant Harbour Porpoise and more surprisingly at least 2 Bottlenose Dolphin just a short distance offshore. 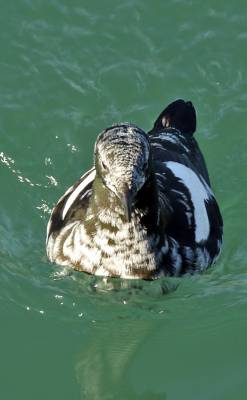 Most of the rest of the day was spent sampling the duck and grebe fest of Loch Ryan. The calm waters once again enabling us to spot things over long distances. In the clear conditions Ailsa Craig stood out like a sore thumb to the north. The light was sublime and the conditions benign. The probable stand-out feature was a huge straggling flock, perhaps a 1000 strong, of Greater Scaup several hundred metres offshore, with a supporting cast of Great Northern Diver, Slavonian Grebe. 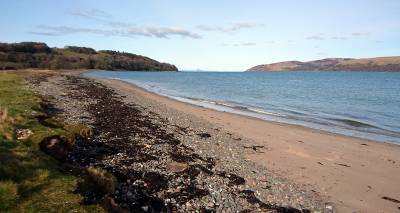 Looking North towards the mouth of Loch Ryan

By Monday 29th Feb (yes it’s a leap year) the weather had deteriorated to a blustery drizzle. Just before reaching the first rendezvous I had to make an emergency jink in the road to avoid running down a Woodcock. We convened at Loch Ken and duly notched up the hoped for Greenland White-fronted Geese and just a short time later a Willow Tit announced its presence and was closely enjoyed by all. All the while, despite the bleak conditions, we were being overflown by Red Kites. There a few more elegant birds on the wing in Britain and most of the group had really got the hang of picking out their distinctive dropped hand profiles by the end of the day.

Our final location of the long weekend was the superb RSPB Mersehead reserve. Tree Sparrows and Chaffinches from the centre windows greeted our arrival before we headed out into the now buffeting winds. Two excellent hides overlook the shallow flashes and it provided a superb selection of dabbling ducks to help hone the groups identification skills. The sudden arrival of a 2nd year Peregrine Falcon in low hunting mode caused an eruption of Teal. This magnificent raptor is always a majestic spectacle. Bestowed with an excess of charisma and exquisite dynamic flight they truly are a superstar of the bird world. They are however frequently unsuccessful in their hunting attempts and its wary wildfowl quarry comfortably kept its distance on this occasion. 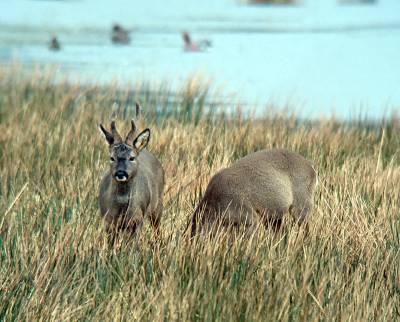 A pair of Roe Deer in peak condition

Just before departing we had superb views of a pair of Roe Deer. The velvet on the Roebucks antlers clearly evident, as was the females swollen belly. These animals looked in splendid condition and having left my camera gear in the vehicle I tried a shot of them with my phone through the scope.

Too soon it was time to head for home but it won’t be long before this magical corner of Scotland tempts me back once again.