A Sense of Inner Farne 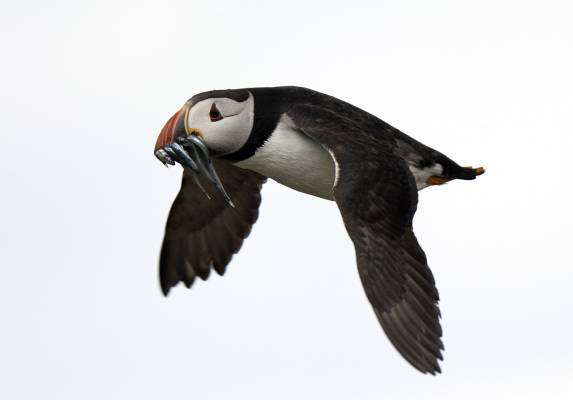 One of the joys to be found in teaching folk about birds; how to identify them; understanding their ecology etc. is that you get to commune with lovely people in some fantastic places. The final chapter of my Birdcraft Course Spring 2017 would take place along the fabled Northumberland coastline.

Difficult weather conditions on the morning of Saturday 10th June resulted in a quick re-evaluation of our itinerary and we quickly repaired to the bird rich area around Low Newton. We had barely reached the shoreline when we were entertained by a Little Tern fishing in the bay at close quarters. Stonechats and Meadow Pipits scavenged the strandline for invertebrates in the wet and windy conditions alongside House Sparrows and Starlings. Later as the weather improved we explored the area by Low Newton pool and here enjoyed singing Sedge and Willow Warblers together with Yellowhammers. 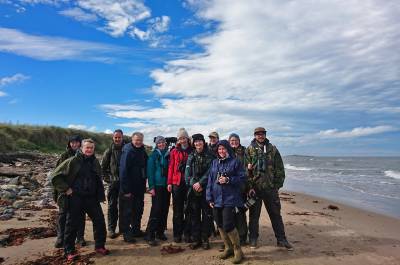 After lunch, we headed for Amble for a hastily arranged trip out to Coquet Island aboard the Puffin Cruise excursions. As we left the harbour conditions were lumpy and overcast. Closer to the island the boat gained some protection on the leeward side and here we enjoyed a four-tern feast. The Arctic Terns dominated, with lesser numbers of Sandwich and Arctic Tern. However, our main quarry was the globally threatened Roseate Tern. We were able to pick them out from their congeners by their overall paler plumage and long slender black bill combined with longish red legs. Having made this trip out to Coquet several times I had yet to secure a decent image of one in flight. This time I got something passable despite the bobbing of the boat. 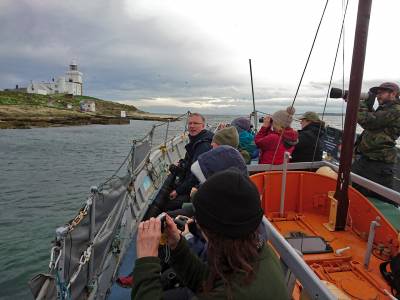 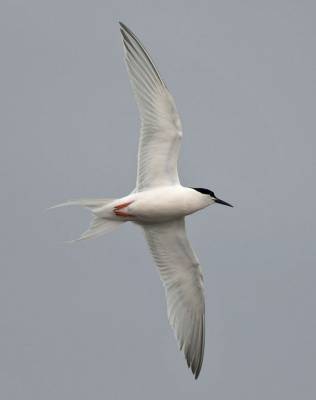 The trip passed in a flash and before long we were once again in Amble. From here we made the short trip out to Hauxley to walk the coastal edge, where we found a Red-throated Diver not too far offshore. We enjoyed a good variety of species but were probably most entranced by the Swallows, dashing hither and thither over the seaweed strewn shore, snapping at flies as they passed right below our feet. 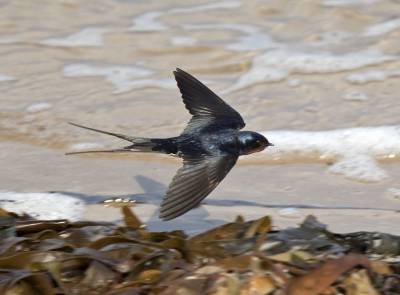 Sunday 11th dawned grey and windy. It soon transpired that we would not be able to land on Staple Island as part of our ‘All Day’ birding trip to the Farnes aboard Billy Shiel's Glad Tidings IV. This meant a delay till 11.30am, so we set off to walk along the beach from Beadnell to the Long Nanny where we could view the tern colonies. We just about spied the nesting Little Tern through the wafting Marram Grass, but the highlight of the walk was a Curlew Sandpiper in the mouth of the Brunton Burn. 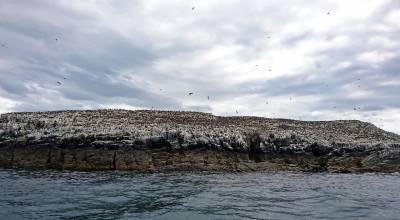 We boarded MV Glad Tidings IV at 11.30am and began our tour of the various islands. I managed to grab a few shots from the boat of ‘Bridled’ Common Guillemot, as well as a few flight shots of the other passing auks. Shortly before landing on Inner Farne the boat was coaxed close into the shore for intimate views of the Atlantic Grey Seals, for which the islands are justly famous. 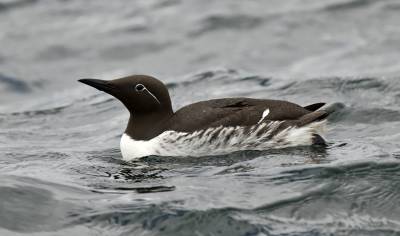 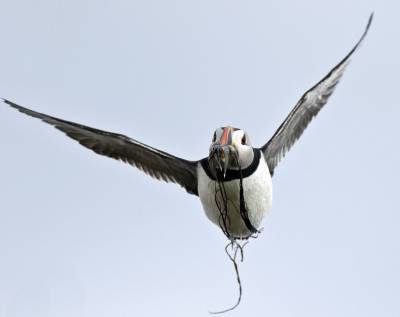 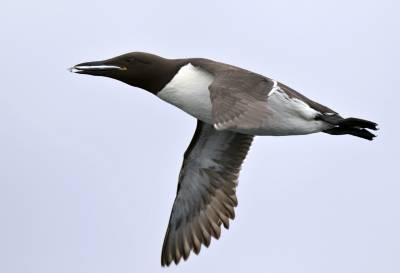 Once landed on Inner Farne it is always amusing to watch the first-timers run the gauntlet of marauding Arctic Terns. The birds take no prisoners in defence of their eggs and chicks. Luckily all my team remembered to bring a hat, though some regretted not having a wider brim. The general public were less lucky and some would return home with numerous puncture wounds. 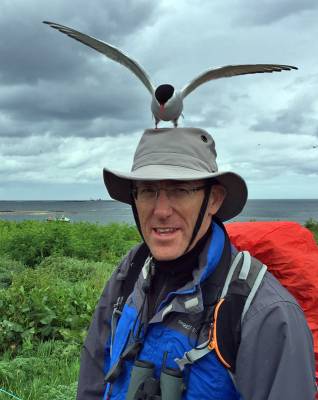 Three species of tern breed regularly on the islands, Sandwich Terns clump together in a tight colony at the centre portion of Inner Farne. Common Terns are usually dotted loosely in close proximity to the Sandwich Tern colony. Meanwhile the Arctic Terns, by far the commonest species, are spread widely over the northern portion of the island, particularly in the area of the chapel. 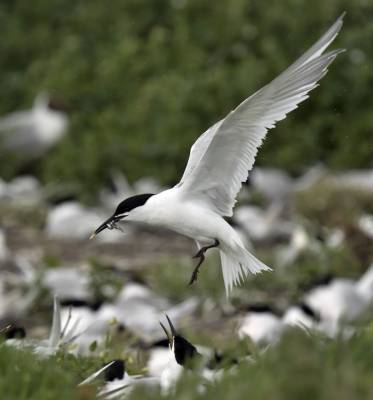 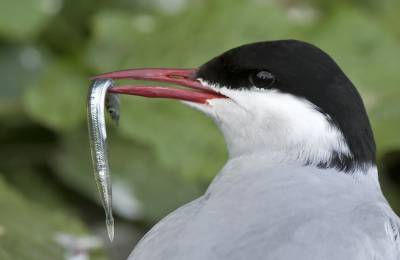 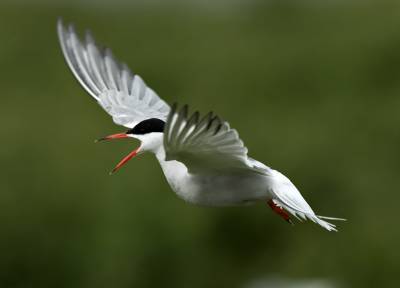 The Guillemots and Razorbills decorate the cliffs on the south and east side of the island, together with Kittiwakes, Fulmars and Shags. The vegetated areas of the island are pock-marked with burrows of the crowd-pleasing Atlantic Puffin. Many birds were returning with fish and had to make a quick dash for their burrows to prevent the Black-headed Gulls from klepto-parasitising them. 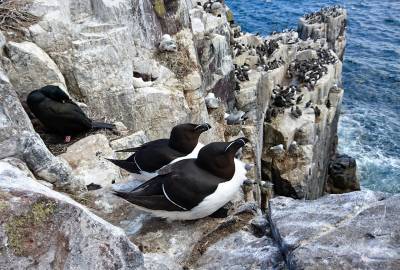 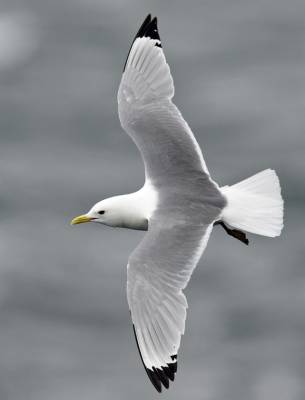 The whole island was a frenzy of breeding activity and in some cases, the terns had newly hatched chicks, whilst other pairs were still in the process of mating prior to egg laying. The island is an assault on the senses and a visit at this time of year leaves an indelible impression. 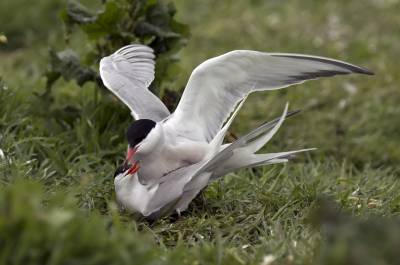 As we boarded the Glad Tidings IV, for our return to Seahouses, we had all thoroughly enjoyed the experience, despite the half-gale pummelling us throughout our sojourn on the island.

On our return to shore we bade our farewells and I dropped in at Low Newton hoping to photograph Little Tern. None were in the bay but an obliging flock of summer plumaged Sanderlings were searching the strandline and I spent a few joyous minutes sitting quietly among them photographing their antics. A delightful end to a fantastic ‘Farne’ weekend. 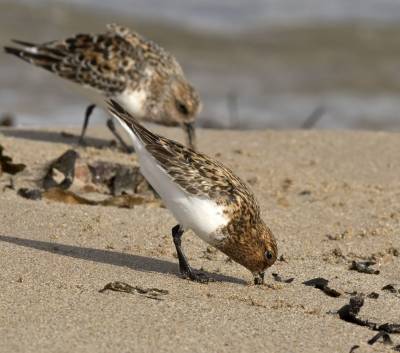